Rheumatoid Arthritis Of The Hand | Florida Orthopaedic Institute
0
was successfully added to your cart.

Rheumatoid Arthritis Of The Hand

Rheumatoid arthritis of the hand is a disease that results in the swelling of the joint lining. The disease invades the surrounding tissues and produces a chemical that destroys the joint surface. The main symptoms are deformities in the hand and pain that gets worse over time.

Depending on the severity of your rheumatoid arthritis, either a non-surgical or surgical treatment plan is recommended. If your rheumatoid arthritis is not severe, then your physician will recommend non-surgical treatments. Unfortunately, neither treatment type can reverse any damage done to the joint. Both of these treatments help reduce symptoms and help you return to your daily routine.

The bones in your hand include:

Between these bones are joints which allow you to move your fingers. 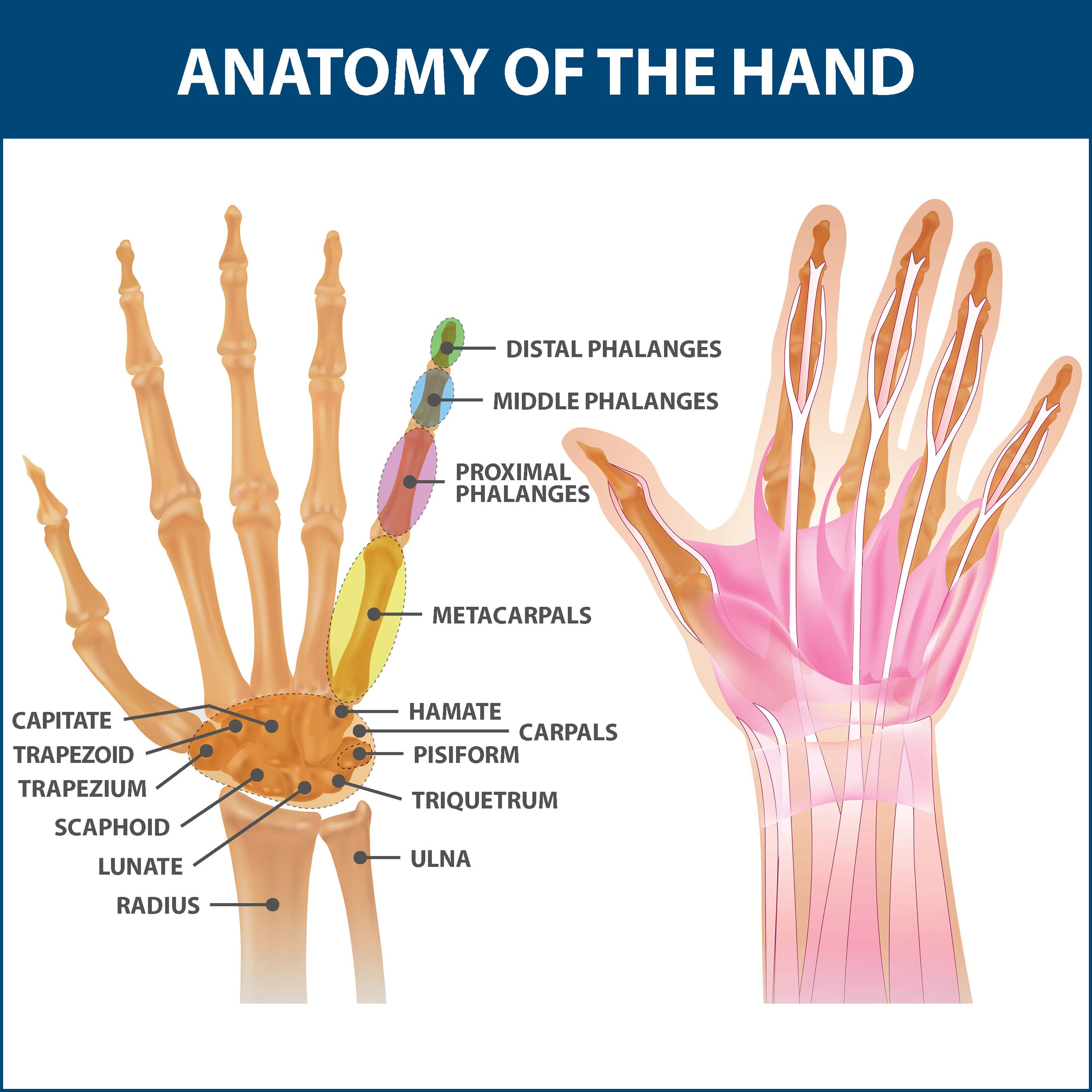 Rheumatoid arthritis of the hand is a disease in which the joint lining in your hand swells, invades surrounding tissues, and produces chemical substances that attack and destroy the joint surface. The disease usually begins in middle age. Without proper treatment, rheumatoid arthritis can become a chronic, disabling condition.

If you have rheumatoid arthritis, your ligaments and joint capsules become less effective supporting structures. Erosion of the articular cartilage, together with ligamentous changes, results in deformity and contractures in the hand. As the disease progresses, pain and deformity increase.

There are several symptoms associated with rheumatoid arthritis. These symptoms include: 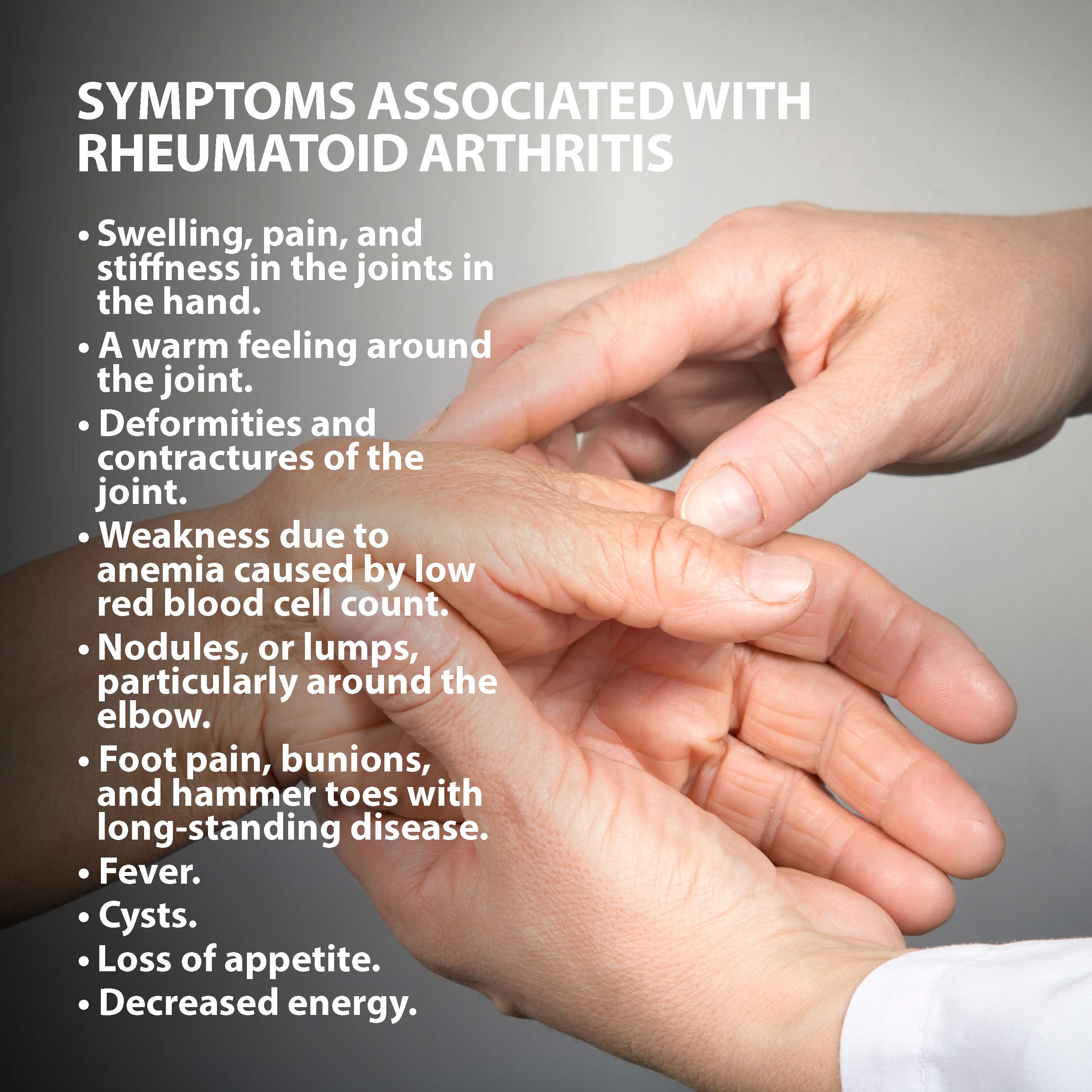 Your Florida Orthopaedic Institute physician will take a look at your symptoms and overall health and medical history.

A blood test may reveal an antibody called rheumatoid factor, an indicator of rheumatoid arthritis. X-rays can help show the progression of the disease.

The American College of Rheumatology requires at least four of the following seven criteria to confirm the diagnosis:

Your treatment plan will be tailored for you as rheumatoid arthritis of the hand varies greatly depending on the severity. It is important to seek help early so that treatment can begin.

Medications are used to treat symptoms but unfortunately cannot restore joint cartilage or reverse any joint damage. The most common medications for arthritis are anti-inflammatories, which stop the body from producing chemicals that cause joint swelling and pain. Examples of anti-inflammatory drugs include medications such as Aleve (naproxen) and Advil and Motrin (ibuprofen).

Your physician may prescribe dietary supplements or “nutraceuticals” such as glucosamine and chondroitin. Nutraceuticals are not drugs but compounds that are the “building blocks” of cartilage.

Injections may also be used to treat your rheumatoid arthritis of the hand. These typically contain a long-lasting anesthetic and a steroid that can relieve pain for weeks to months. These injections can be repeated a limited number of times, due to possible side effects, such as lightening of the skin, weakening of the tendons and ligaments and infection.

Disease-modifying drugs act on the immune system to slow the progression of rheumatoid arthritis. This is why they are called “disease-modifying.” Many different drugs can be used as DMARDs in the treatment of RA, but some are used more often than others.

Biologic drugs are the newest drugs for RA. They are either injected under the skin or directly into a vein. They work by neutralizing one of the immune system’s signals (TNF) that lead to inflammation and joint damage.

Rituximab (Rituxan) and Tocilizumab (Actemra) are also biologics, but they do not block TNF.

Other drugs used to combat RA include:

Your physician may also prescribe splinting, which can help support the joint to ease the stress placed on it from frequent use and everyday activities. Splints are typically worn during periods when the joints hurt and small enough to allow use of the hand when they are worn.

If nonsurgical treatment fails to give relief, surgery is usually discussed. Your Florida Orthopaedic Institute physician will recommend a surgical treatment that has a reasonable chance of providing long-term pain relief and return to function and tailored to your individual needs. If there is any way the joint can be preserved or reconstructed, this option is recommended.

If the damage has progressed to a point that the surfaces no longer work, a joint replacement or a fusion (arthrodesis) is performed. Joint fusions provide pain relief but stop joint motion. The fused joint no longer moves and the damaged joint surfaces are gone, so they cannot cause pain and other symptoms. The goal of this procedure is to provide pain relief and restore as much function as possible.

After any joint reconstruction surgery, there is a period of recovery. Often, you will be referred to a trained hand therapist who can help you maximize your recovery. You may need to use a post-operative splint or cast after surgery. This helps protect your hand while it heals.

Contact your Florida Orthopaedic Institute physician today for more information on rheumatoid arthritis of the hand.

The following Florida Orthopaedic Institute physicians specialize in Rheumatoid Arthritis Of The Hand: