Your wrists enable you to move your hands and perform a significant number of simple and complex tasks. Wrist injuries can be painful and may cause significant disability. One such problem is an inflammatory condition known as de Quervain’s tenosynovitis.

The wrist is made up of numerous tiny bones and soft tissues, such as tendons. De Quervain’s tenosynovitis impacts the two tendons at the thumb’s base. 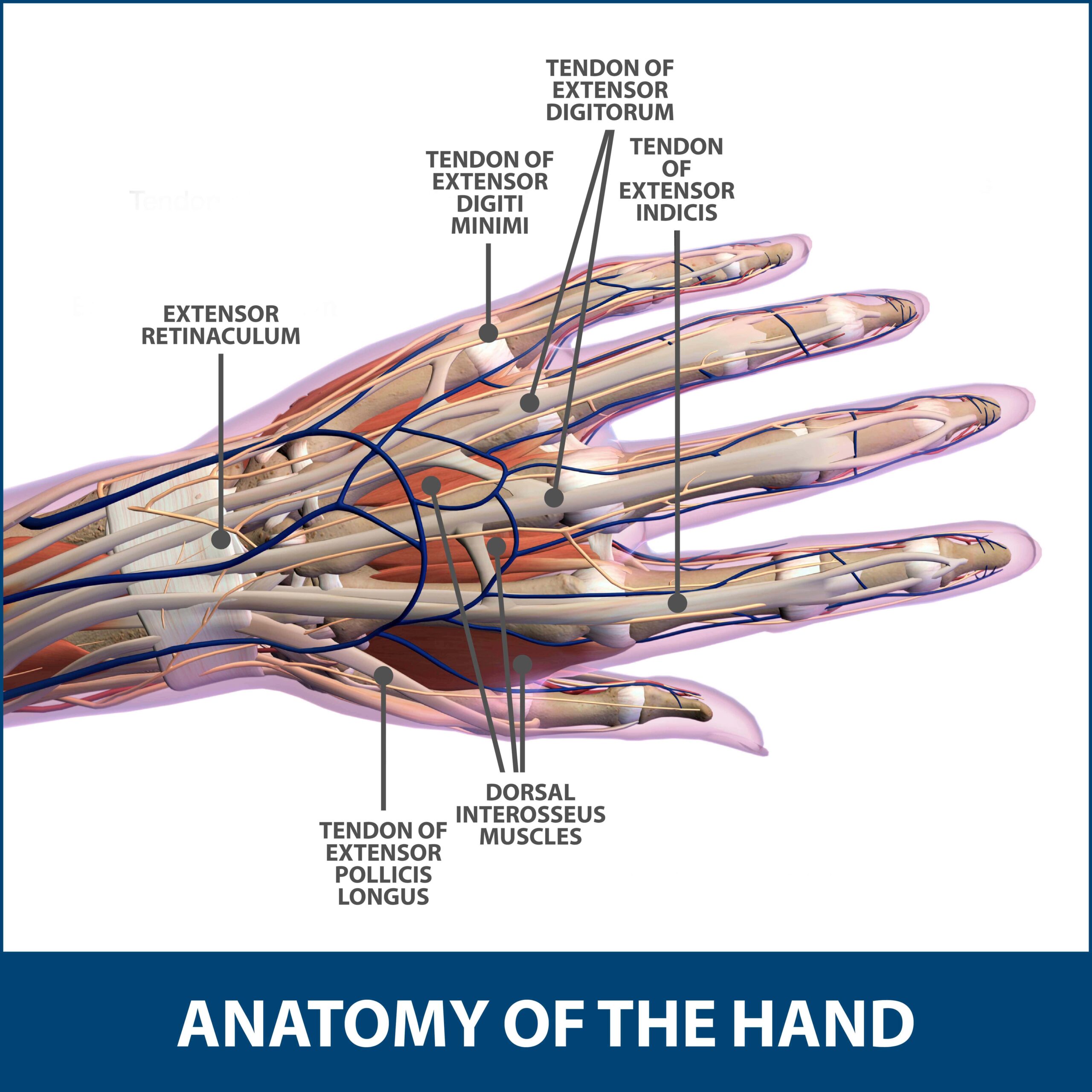 Medical researchers have been unable to identify a specific cause of de Quervain’s tenosynovitis. Chronic overuse of the wrists could be a significant factor since tendons attach muscle to bone and are used in the smooth and fluid movement of the hand and wrist.

People who consistently grip, grasp, or pinch are at higher risk by placing increased pressure on the wrist tendons. Additionally, traumatic wrist injuries or inflammation-inducing diseases, like arthritis, are thought to be potential triggering causes.

Parents of babies and young children are also considered a high-risk category since they often lift their children frequently and unintentionally use their thumbs for leverage and balance. These repeated motions place undue strain on thumb tendons that may lead to de Quervain’s tenosynovitis.

The most common physical indication is pain. Discomfort from de Quervain’s tenosynovitis typically appears as a moderate to severe ache at the thumb’s bottom. The pain is often described as a sticking sensation that comes and goes. However, the discomfort is most severe when they move their thumb or perform some type of gripping or grasping movement. Other symptoms include swelling around the thumb’s base and difficulty with doing basic wrist movements.

De Quervain’s tenosynovitis is a progressive ailment, meaning that failure to address it early can lead to further complications. A lack of medical treatment could cause serious problems, such as pain extending into the thumb, the entire wrist, and even the forearm. Additionally, progressive nerve damage could eventually threaten overall movement.

Your Florida Orthopaedic Institute physician will begin the examination of your hand by testing to see if you feel pain or pressure when executing simple wrist, hand, and thumb movements.

Your physician may also perform the Finkelstein Test. In this test, the patient bends their thumb over their palm, bending the remainder of their fingers downward atop the thumb and bending their wrist towards their little finger. If this causes pain in the wrist’s thumb side, the diagnosis will likely be confirmed.

Typically, imaging tests like X-rays or MRI scans (Magnetic Resonance Imaging) are not necessary to reach a diagnosis.

The specific treatment employed depends upon several different factors, including:

Other factors that might play into designating specific treatment include a patient’s lifestyle (example: if they are the parents of babies or young children), and their level of physical activity.

In mild cases, over-the-counter non-steroidal inflammation-reducing or pain-alleviating medications are recommended, such as Advil/Motrin (ibuprofen) and Aleve (naproxen). However, if swelling is severe, steroid injections made directly into impacted tendon sheaths are a treatment option.

Other non-surgical options include: 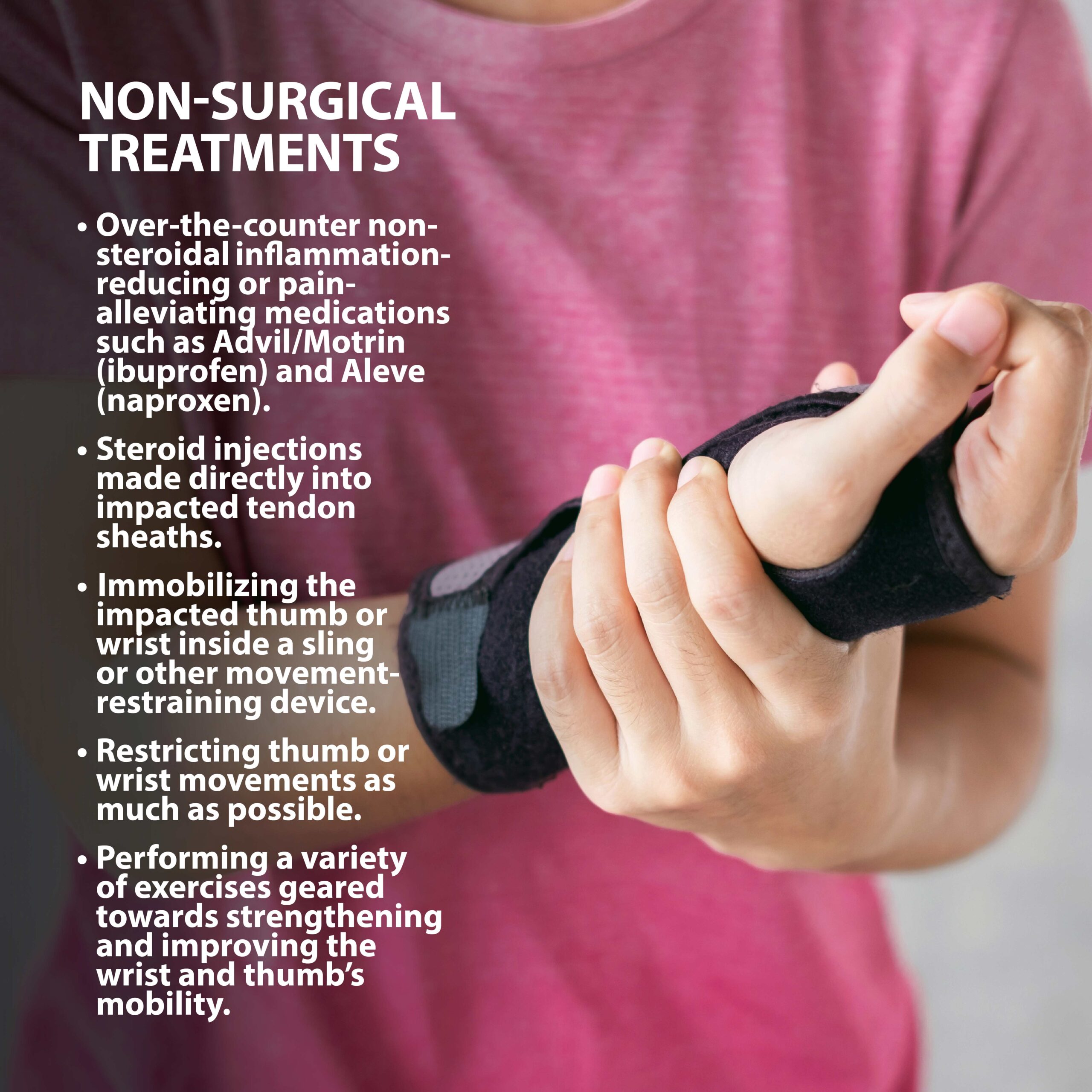 Some individuals benefit from occupational therapy. A professional known as an occupational therapist reviews how the patient moves their wrist and thumb when performing routine activities and offer suggestions on how their actions can be made with greater efficiency.

In more serious cases, surgery may be indicated. Surgical intervention typically involves the opening of the sheaths to alleviate the pressure on surrounding tissues and nerves. Following surgery, physical therapy may be recommended to help the patient recapture strength and mobility in their wrist and thumb.

Anyone experiencing pain in the hand or symptoms of de Quervain’s tenosynovitis should consult with an orthopedic hand specialist as soon as possible. Delaying treatment can result in worsening local pain, a discomfort that spreads to other portions of the hand or arm, and quite possibly, create future mobility problems.