Those who lose a limb often have intense pain that seems to be coming from the part of the body that’s no longer there. Even with daily medicine, drugs can only mask the pain, but not cure it. Pain following amputation affects many patients. It is caused by many factors, but much of it is related to the development of neuromas (disorganized and painful nerve endings) stemming from the trauma or surgery.

For the nearly two million Americans who have lost a limb, relearning how to perform simple tasks with a prosthetic takes time and patience. For a lot of amputees, this can be virtually impossible due to constant pain caused by severed nerves.

Targeted Muscle Reinnervation (TMR) brings amputees relief and helps them get back to their daily lives. TMR was initially developed to work with new technology in bio-prosthetic limbs, but surgeons noticed that amputees who had TMR surgery also reported a significant reduction in both neuroma and phantom limb pain.

TMR connects amputated nerves to nerve branches of a nearby muscle group, creating new connections and giving those previously disconnected signals somewhere to go. TMR tricks the brain into thinking that the amputated part is still there because the nerve that was going to that part has something to do again. When TMR was performed at the time of amputation, researchers found that a small percentage of patients reported pain six months later.

Besides reducing pain, new advancements in artificial limbs include sensors that can actually read those new nerve connections created during TMR surgery. It allows amputees to move their prosthetics with more variables.

TMR for arm amputees reassigns nerves, giving an amputee the opportunity to use a prosthesis that allows for elbow, wrist, and hand movements. The procedure is performed differently depending on the type of arm amputation. TMR is paired with extensive rehabilitation enabling the patient to learn how to use the advanced prosthesis.

The goal of TMR for the upper extremity is to achieve a higher level of function and more precise control, especially in upper extremity amputations at the elbow or higher. Coordinating motions such as elbow flexing and hand gripping are possible with TMR.

The treatment of symptomatic neuroma pain after upper or lower extremity amputation has historically been to cut out (resect) the tissues including the nerves. Targeted Muscle Reinnervation (TMR) was developed initially for improved prosthesis control but has since shown promising results in the treatment of neuromas – growths or tumors of nerve tissue. With TMR, the nerves are transferred into small nerve branches of the muscles allowing the amputated nerves the opportunity to connect into the transferred muscle.

Video examples about TMR and prosthetics:

Each time a movement occurs, such as bending the elbow or twisting the wrist, signals go from the brain through the nervous system to the appropriate muscle that then performs the movement. When the arm (specifically the shoulder and below) is amputated, the nerves that once controlled the hand, wrist, and elbow are lost. The nerves damaged in arm amputees include the musculocutaneous nerve (controls upper arm muscles such as the coracobrachialis, biceps and medial brachialis), median nerve (controls the forearm, wrist and hand movement), radial nerve, (controls hand open and wrist-up movements) and ulnar nerve (controls grasping motion).

Traditionally, most motorized artificial limbs have been controlled by electrical signals (electromyogram-EMG) from pairs of muscles in the amputated limb. This allows for isolated but not coordinated motion.

Targeted Muscle Reinnervation (TMR) is an innovative surgical procedure developed in 2002 by Dr. Gregory Dumanian and Dr. Todd Kuiken, MD, PhD. at Northwestern University, that provides easier, more intuitive prosthesis control for individuals with above-elbow or shoulder amputations. This technology works by reassigning nerves that once controlled the arm and hand, giving an above-elbow or shoulder amputee freedom to control their prosthesis. There are so many nerves and muscles in the body that reassigning one will have little to no effect on daily functions.

With TMR, there are more movements the prosthesis can do: elbow up, elbow down, hand open, hand close, and twist wrist. All these movements are controlled by the brain, thanks to the relocated nerves. In the past, above-elbow and shoulder amputees had significantly less control over their prosthetics and could at most move their elbow up and down. Being fitted with a TMR prosthesis completely changes their lives by giving them more control over their prosthesis and increases their independence.

TMR is best suited for above-elbow and shoulder amputees because they have completely lost all nerves and muscles that control the arm and hand. In the case of below-elbow amputees, they still have some of the muscles and nerves left in their forearm which fire when the brain signals their hand to open or close. These signals enable the prosthetic device to operate with normal brain thoughts.

Besides prosthesis control, TMR is also used to reduce, and sometimes eliminate, pain in patients. 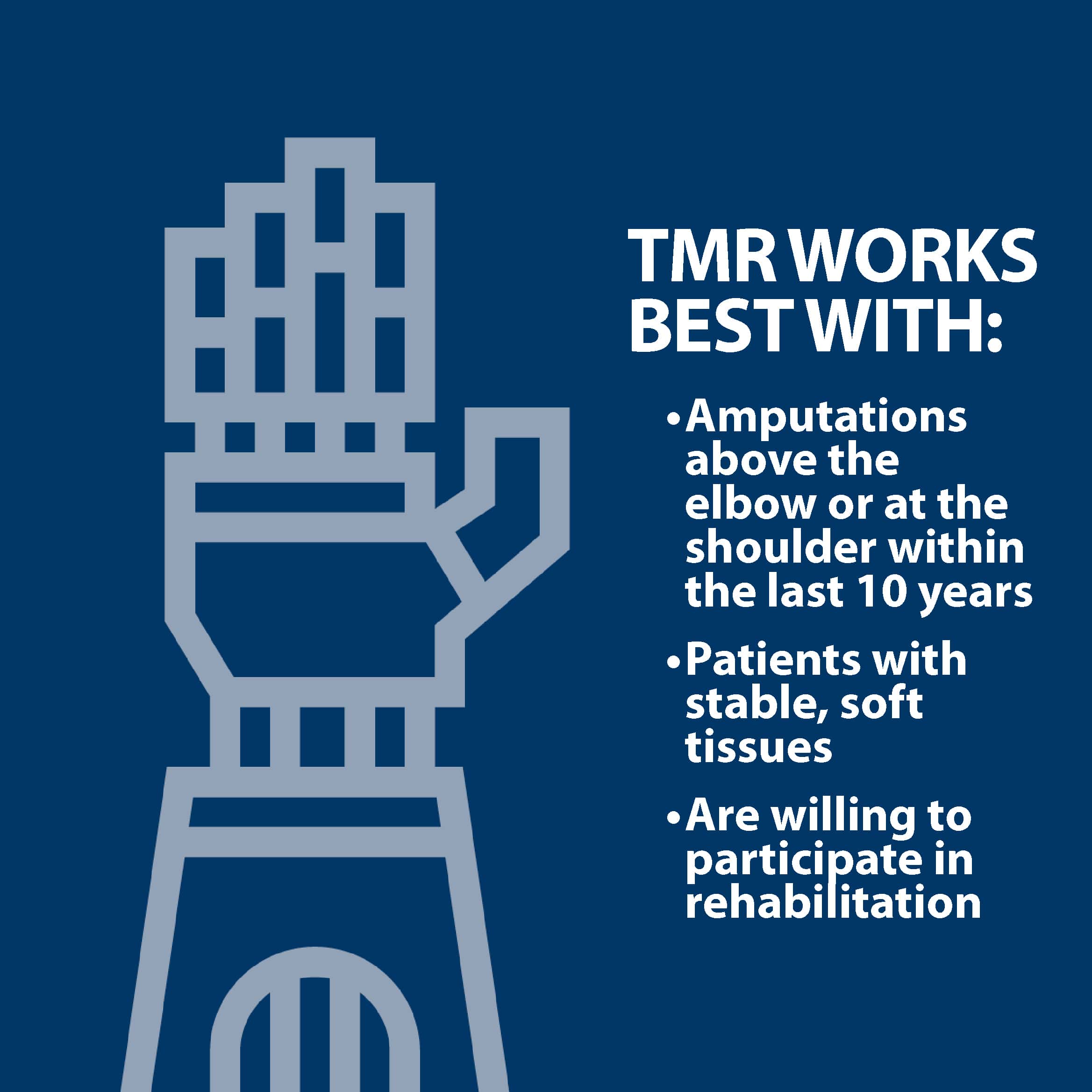 The diagnostic examination of post-amputation pain can involve a local anesthetic injection to determine the cause of the pain and whether it is neuropathic (nerve-related).

TMR is available for any patient with prior upper or lower extremity amputation.

Surgeons at Florida Orthopaedic Institute are fully trained and skilled in TMR. If you, or someone you know, is a potential candidate for TMR surgery, please make an appointment for a consultation.