17th Athlete of the Week | Florida Orthopaedic Institute
0
was successfully added to your cart. 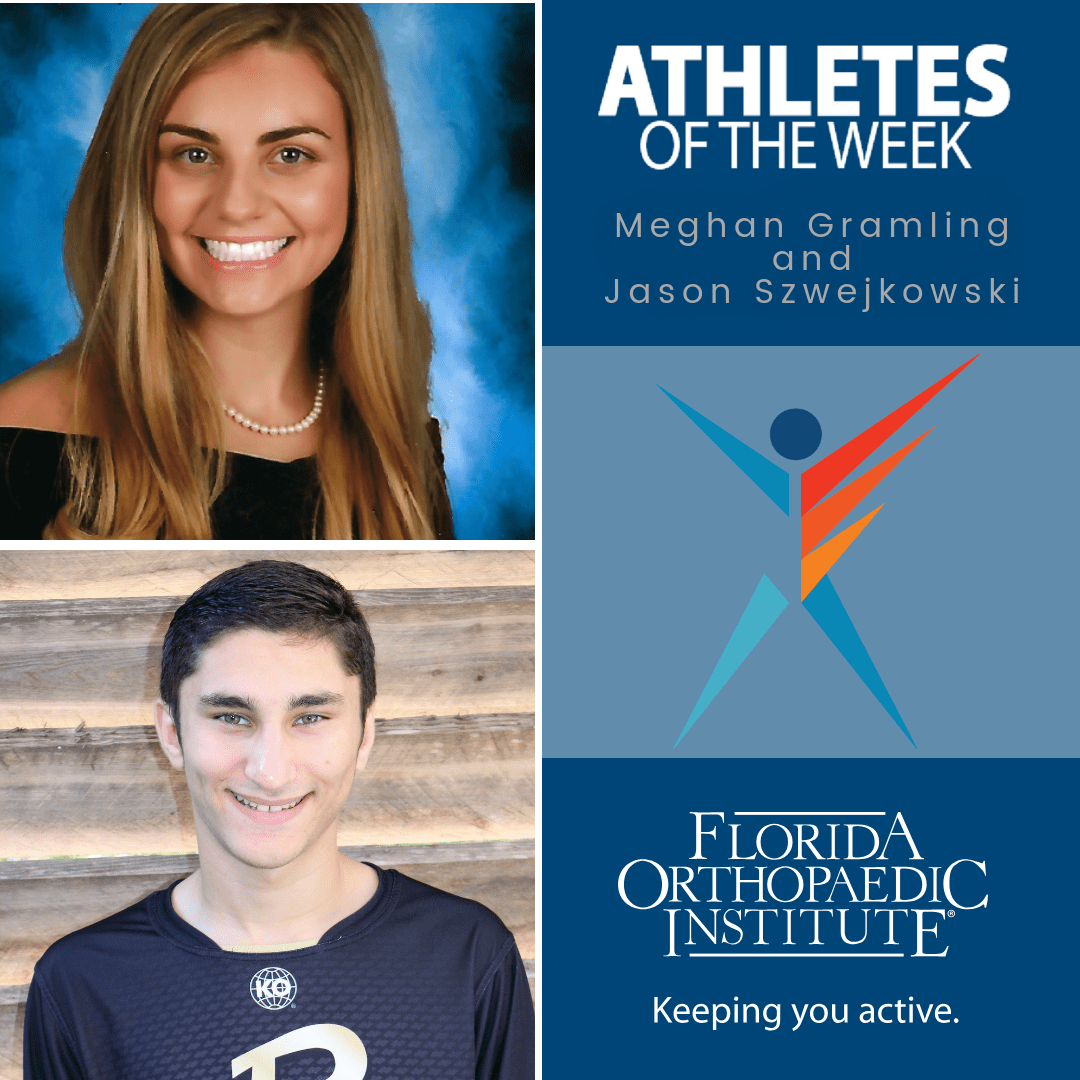 Tampa, FL – Feb. 26, 2019 – Florida Orthopaedic Institute (FOI) is excited to announce Meghan Gramling and Jason Szwejkowski from Plant High School as the ‘Athletes of the Week’ for the week ending February 22, 2019.

Pam Gassler, Girls’ Varsity Tennis Coach, nominated Gramling to be an Athlete of the Week for her commitment and selflessness towards her teammates.

“Meghan has started a program that allows all of the girls to communicate and encourages camaraderie,” Gassler said. “During the season, she organized dinners for the team and included entertaining ‘Get to Know You’ games. Meghan has maintained a high GPA while participating in Tennis as well as other extracurricular activities. She has never earned less than an A.”

Amongst all the obstacles that face her, Gramling continues to make leaps and bounds in pursuit of her goals.

“In an effort to be placed on the Varsity Tennis team at Plant and continue to be a leader,” Gramling said. “I continue to work on my tennis skills in the off season and work with my coach on my co-captain leadership responsibilities. These include coordination of events and communications with my team. Academically, I have completed eight advanced placement classes and am currently taking five to stay competitive. I am also president of the National Honor Society and serve in other leadership roles.”

Szwejkowski was nominated by the Wrestling Head Coach, Jeremy Carter, for his relentless effort and passion for improvement of not only himself, but of those around him.

“Jason, a junior, has worked every day all year round since joining the wrestling team his freshman year,” said Carter. “Jason is always positive, punctual and pushes himself past his limits daily. He is always willing to teach a younger student athlete as well. He is constantly attacking his goals, crushing them and making new ones. During a team tournament at East Bay, he won seven out of eight matches. He is an all-around great kid and a complete example of a team player.”

Szwejkowski knows exactly what is required to give it his all, despite any setbacks.

“Goals involve a lot of work and discipline, especially in the off season,” Szwejkowski said. “I feel I have put in a good amount. Of course, I could always do more and I strive to do so. I know I will train harder in the off season to maintain my strength and stamina. During the season, I have to build from each match, win or lose, by knowing my strengths and weaknesses. It is one match at a time until March when I hope to still be wrestling at States.”

Gramling and Szwejkowski both boast throwing yourself in, getting involved and listening as keys to future success.

“Push yourself academically and get involved in sports, volunteer activities and clubs,” Gramling said. “Do not be afraid of leadership positions and speaking publicly.”

Szwejkowski finished, “Listen to people: your coaches, teachers and parents. They all have good advice that can help on the mats or in life. Listening is hard, but it is worth it.”